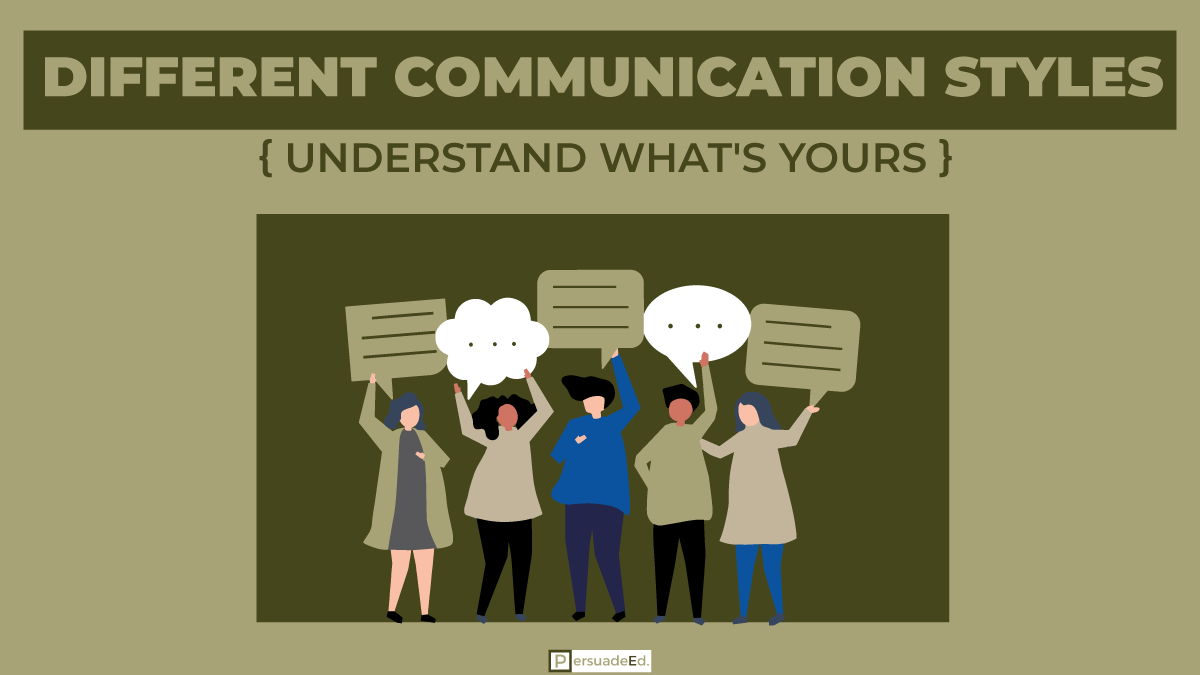 Communication is sending or receiving information between two or more people through a particular medium. If a person is talking and another person is listening, you have a lecture, not a conversation. The conversation is reciprocal and mutual. A conversationalist is a person who likes to talk with an extensive personal and professional network.

In communication, there are four types: passive, aggressive, passive-aggressive, and assertive.

We will get a better understanding of this by breaking down the styles, standard phrases, and what makes each of them unique.

You can create a dynamic, positive work environment by learning about them and putting them to use in your organization.

Your organization will benefit from this by improving communication, enhancing hiring and training, and enhancing many other processes.

An individual who uses passive communication avoids expressing their opinions or feelings, protects their rights, and identifies and meets their needs. The result of this tendency is that passive individuals do not express their anger overtly. It is often unaware that grievances and annoyances are mounting until they are unbearably exacerbated. They are prone to explosive outbursts once they reach the point where they are no longer tolerant of unacceptable behavior, which is usually out of proportion to the triggering event. Often, they are ashamed, guilty, or confused after the outburst, so they become passive once again.

The following behaviors can help you identify a passive communicator:

The following phrases are examples of passive communication:

Communication in this style may be hostile, threatening, and driven by a desire to win at all costs.

Communicators who are aggressive display a sense that they are more important than anyone else in the discussion, and the content of their message is often overshadowed by their tone.

People who experience this type of communication might feel belittled, intimidated, and steamrolled.

In certain situations, people may react by pushing back against aggressive communicators, not because the communicator’s message is incorrect but simply because they are so unpleasantly surprised by how it is delivered.

It has been observed that some business leaders behave in this way, using their style in such a way as to appear confident rather than domineering, but this requires skill.

It is advised that this style is avoided in day-to-day operations because it does not endear one to their colleagues.

People who are aggressively communicative often:

Users of passive-aggressive communication styles may initially appear passive but may feel trapped or powerless on the inside, causing them to resent others or act out in subtle, indirect, or hidden ways.

Rather than confront a person or issue, passive-aggressive communicators mutter to themselves. They cannot acknowledge their anger, express their feelings in facial expressions that do not match their feelings and even deny that there are problems.

The passive-aggressive communicator is aware of his or her needs but sometimes struggles to express them.

What might cause someone to use a passive-aggressive communication style?

When people passive-aggress, they are worried about what others will think about their opinion on the topic. Disagreements are avoided by doing them discretely rather than openly.

The communication style described here is ineffective. Why is that?

The issue of passive-aggression comes up because it circumvents the issue. When people don’t openly express their ideas, it wastes everyone’s time. Clarity is a key-value when communicating.

When you hear people say things like this, ask them how they feel or figure out how they are feeling on the aggressive end of the comment. Communicate with confidence regardless of how you feel, even if you disagree with someone else’s viewpoint.

You are responsible for yourself and respectful of others. Listening and solving problems are skills you possess. As long as you do not violate others’ rights, you stick up for yourself.”

Which are the reasons why you should communicate assertively?

In assertive communication, individuals feel safe to express their feelings because the environment is equal and two-way. Transparency encourages stronger working relationships because of this type of communication. In addition to asking their colleagues for feedback, assertive communicators are comfortable providing feedback to several team members simultaneously. Continual improvement and growth are fostered in this way.

Here are some tips for being assertive

Communicating assertively means expressing your ideas without sacrificing politeness. The perfect style is unattainable for everyone, but for some, it comes naturally. The following tips will help you become an assertive communicator:

Keep honesty as a priority

You need to be honest when you communicate assertively. Whenever you share or respond to other people’s thoughts. When you disagree with someone, you often feel compelled to avoid the issue, but it is better to be kind and disagree rather than agree with an idea you do not believe.

Listen with an open mind

Empathy is a key component of assertiveness, as is understanding the point of view of the other person. This can only be accomplished by listening. Make sure your ears are open and that your mouth is closed when someone is talking to you.

Generally, it is perfectly okay to agree to disagree if you have done all you can to understand another person’s viewpoint, but you still cannot concur with their view. Respectfully is fine as long as it is done.

Occasionally, someone might say something that makes you angry, upset, or angry. Being human with emotions is not a bad thing. You can’t let this anger show if you want to be an assertive communicator. You must keep your voice normal, take deep breaths, and relax your face.

If you want to succeed in assertive communication, you have to commit the time to make it work. You can improve your assertive communication skills by practicing these tips daily. You will certainly be tested in both patience and willpower. However, for the improved communicator, you will become, it will be well worth the effort.

Passive-aggressive behavior can border on manipulative behavior, but manipulative behavior involves actively doing things in a planned and unscrupulous way to ensure one’s needs are met. They may choose to withhold information from one party while providing it to another in anticipation of the conflict it will cause and how it will affect the outcome of the situation.

A person who uses this style is scheming, shrewd, and calculated. Communication manipulators can influence and control others for their own gain. Many times, the other person is unaware that there is a deeper meaning behind what they say. Insidious, they make other people feel sorry or obligated to help them through shuffling, using fake tears, sulking, complaining, and using indirect means to get what they want.

They often speak with an envious and high-pitched voice that can be patronizing, and ingratiating. There will still be guilt, anger, frustration, irritability, and uncertainty for the other person.

In direct communication styles, an author says exactly what he means; he is forthright in his style of communication. It is usually important to be clear and unambiguous. It is more common for “western” cultures and countries to value these styles, which are mostly used in individualist cultures.

PrevPrevious POSTBody Language in Communication
Next POSTHow to Deal with JerksNext
RECENT POSTS
85+ Best Flirty Knock Knock Jokes to Make Her Laugh
100+ Best Questions to Ask Your Friends About Yourself
100+Heart Touching Emotional Brother and Sister Quotes and Messages
100+ Controversial Relationship Questions to Ask Your Partner and Spouse
FEATURED POSTS
Japanese Names That Mean Moon
Cute Spanish Nicknames for Girlfriend
What Does it Mean When a Girl Calls You Daddy?
What Is the Spiritual Meaning of a Bird Flying in Your House?