How Has Social Media Affected Communication 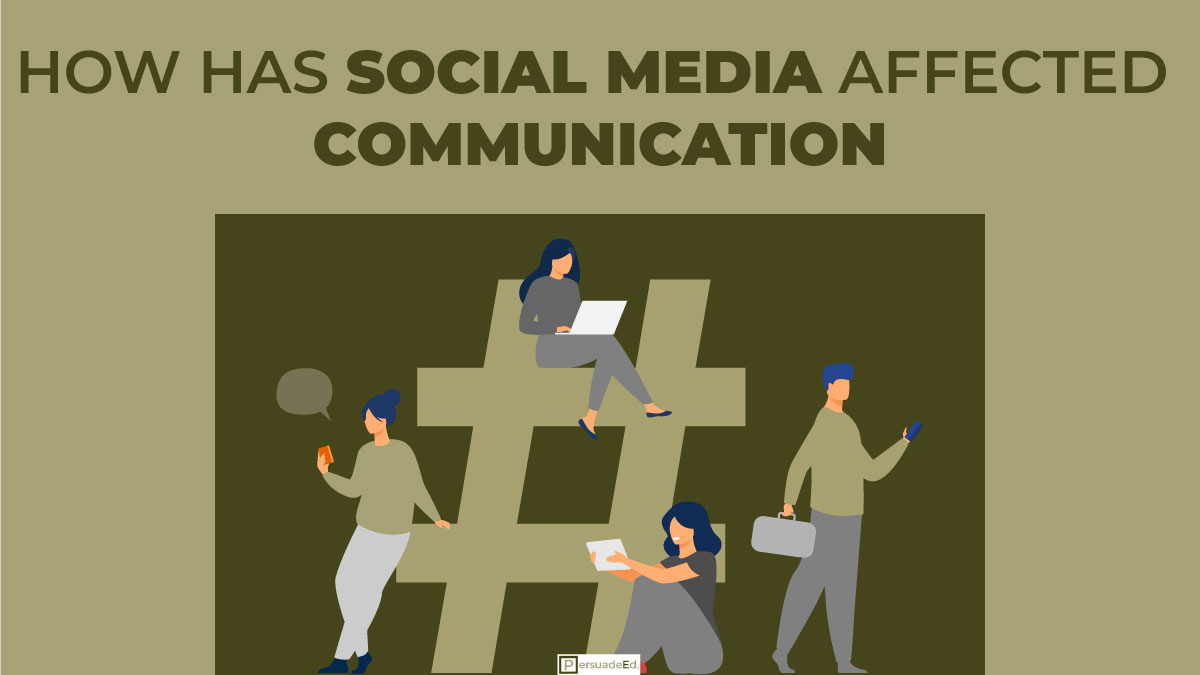 Since the emergence of Social Media, our ways of communication have totally changed; before social media, we were limited to interacting with a smaller number of people, but now doors are open to communicating with anyone in the world.

Also, we can share our thoughts, feelings, views through social media and have discussions over them with even unknown people.

‘How has social media affected Communication?’ The answer to this question is very simple. Social media has affected communication in both ways, i.e., negative and positive ways. But before having a look at them, let’s know about Social Media.

Effects of Social media on Communication

Today, around 3 Billion people use Social Media platforms, which is about 40% of the World’s population. So it means Social Media undoubtedly affects our ways of communication. So let’s have a look at both the Positive and Negative effects of Social Media on Communication!

1) Doors to Communicate with more people are open- With the emergence of Social Media, now anyone using social media apps can communicate and share messages with anyone in the world. Now the distance of exploring new people has reduced with social media.

If you use social media, you surely have someone who lives far away or in another country but is added to your social media. This allowed us to know new people and explore their cultures and other aspects.

2) Sharing Information has become fast and easy – If we want to share a message about anything, we can do that using social media. Like you want to send specific messages to your family members and friends, you can simply broadcast that message. Now you need not call every person and communicate your message.

Or, in another way, you can see any tweet, picture, or life event of your idol/artist in no time.

4) Social Media can fill physical absence- With the use of social media, the physical lack of a person can be filled, and you can just communicate with them through social media. For example, a person is in foreign and is far away from family. Now with social media, his family can video call him and talk to him. It eases the feeling of absence.

5) Easier to raise voice and join together – With social media, now people of the community, state, or country can quickly join together and raise their voices against any kind of wrongdoing. Before social media, posters, newspapers, phones were the only medium that was very slow. So now communities can join together, which is a good thing that social media has done for communication.

3) Boredom in Real-Life Communication- Here’s the unfortunate effect of social media on real-life communication. In-person conversations are becoming tiresome. Often, people become bored during real conversation and resort to their phones, as they want instant, colorful feedback available only on social media. The result can be a decrease in the depth and number of meaningful conversations.

4) No filter on expressing emotions- With social media, people know how to communicate and say anything they want to without even thinking about what the person on the other side will feel or interpret. This leads to unhealthy communication or incomplete communication.

For example, you didn’t like someone’s photo, and you commented wrong things on the post; this way, the other person may feel inadequate.

In this sense, social media has decreased the quality of communication.

This was our article on ”How has social media affected Communication?” Don’t forget to take a lesson from this article and decrease your dependency on social media. Also, tell us how our article was in the comments. Suggestions are also welcomed.

PrevPrevious POSTWhat Effect Does “Noise” Have in the Communication Model?
Next POSTConversation QuotesNext
RECENT POSTS
85+ Best Flirty Knock Knock Jokes to Make Her Laugh
100+ Best Questions to Ask Your Friends About Yourself
100+Heart Touching Emotional Brother and Sister Quotes and Messages
100+ Controversial Relationship Questions to Ask Your Partner and Spouse
FEATURED POSTS
Japanese Names That Mean Moon
Cute Spanish Nicknames for Girlfriend
What Does it Mean When a Girl Calls You Daddy?
What Is the Spiritual Meaning of a Bird Flying in Your House?