How to Catch a Liar 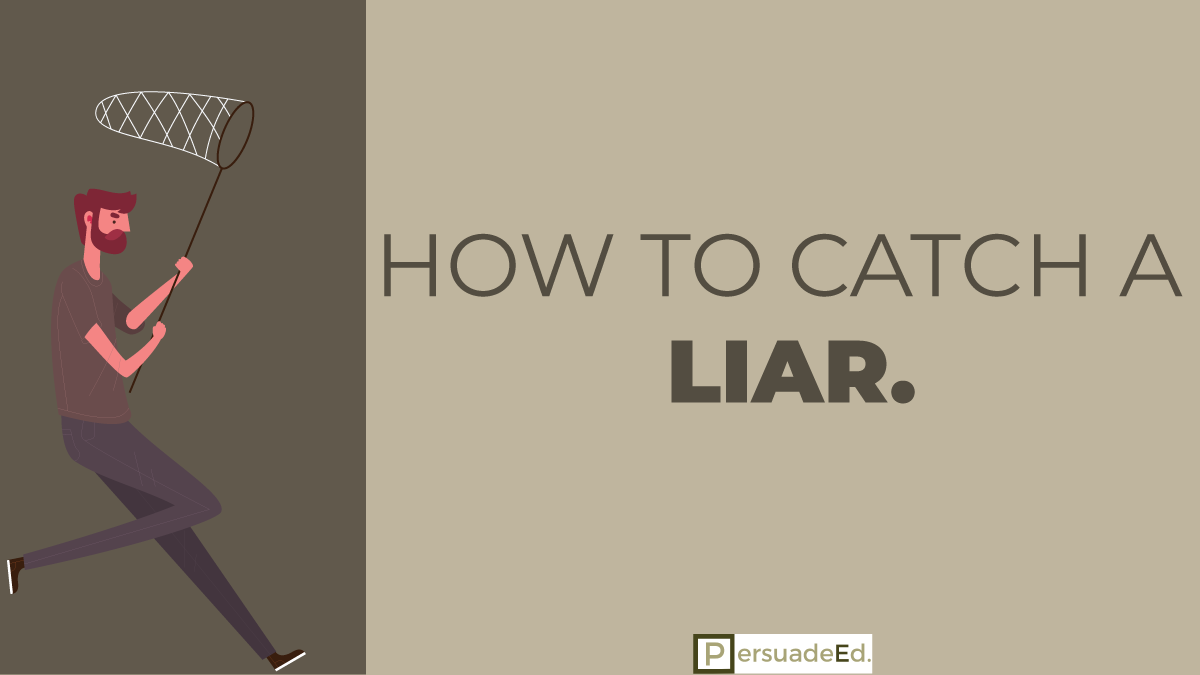 Lying is a subject that almost universal in nature. Humans have the tenancy to classifying lies. Some lies we think of as big lies, and others we think of as insignificant. Have you ever told a lie? I suspect every one of us would have to answer “yes” to that question. Humans are the first and foremost social animals. For humans, successful social interaction is the key to success in much of our lives.

So it is clear that lying is an excellent way of keeping elaborate social structure running smoothly while looking out for number one. The ability to lie and to detect a lie became pretty important to early humans. Because lying is not very easy for a brain to do, and it caused a bit of an evolutionary arms race.

The way you can catch somebody in the act of lying

This is one that’s very important for when you’re talking to girls, when you’re speaking to other coworkers as well as a few of your friends and loved ones.

Liars can’t keep their stories straight. That is basically what psychologists mean when they say inconsistency. And study has proven it is a big sign of lying. This is a common tactic used by police during interrogations. They ask the suspects to repeat their story again and again. They were hoping to poke holes in it when certain details are inconsistent.

Evasiveness is one of the biggest signs of dishonesty. Basically, when people are lying, they are less likely to be specific. They might say, ” i don’t know, or i don’t remember”. In the term of lying this is a massive red flag.

Although this is another huge sign of lying, it is very hard to spot. Because some liars are just really good at acting. one study showed that only certain facial muscles are activated when people are experiencing genuine happiness. These muscles are called the orbicularis oculi, otherwise known as cow’s feet. But you would have to be a serious expert on the spot on which muscles are being activated in the face.

If you ever doubt that someone is telling the truth, ask them to tell their story backward. it is proven that when people are lying, they have trouble telling their false version of events in reverse. When people are lying they have an increased cognitive load. This basically means that liar’s brain is working much harder than those who are telling the truth. When you ask a liar to tell their story backward, this might push their story cognitive load over the edge, leaving them unable to keep the story straight.

Not maintaining eye contact has to be one of the most obvious signs of liar. Eye contact is linked with truthfulness and multiple studies have linked lying with the inability to look someone in the eye. Although this has been explored by research, it only takes a little bit of common sense to see why this is true. Once again, it goes back to evasiveness.

Liars cannot handle unexpected questions; as we mentioned previously liars are using their brain much more those telling the truth. Honest people do not have to think too hard about what they are saying, they are simply telling the truth. Liars, on the other hand, are inventing entire stories and situations clearly out of their own imaginations. Sometimes they plan out their responses and stories long in advance. That is why when we ask them unexpected random questions, it often catches them out. It is another technique the police often use; simply asking them what they were wearing or what they ate could be enough to leave a liar stuttering.

This is another sign which is incredibly hard to spot. Research has shown that facial expressions linked with genuine emotions might only last a few milliseconds. As a general rule, shorter expressions are usually real. Longer drawn-out expressions have a higher chance of being fake. A liar is essentially trying very hard to show everyone what they are feeling, as opposed to genuinely feeling these emotions. The problem is that these genuine micro-expressions are very hard to spot. Sometimes they are impossible to ever see because they are so quick.

But there might be an easier way to spot what psychology refers to as masked emotion. Just take note of how often someone is blinking. Research has shown that frequent blinking is linked to mask emotions, a clear sign of lying.

Their facial expressions and their emotions do not match up. This is something most of us are not familiar with. Sometimes people just give us a strange vibe. Often this is because their emotions and facial expressions seem totally disconnected. They might be smiling when their body language seems sad or vice-versa. Study have shown that this is a major red flag when it comes to lying.

Now we are getting into expert territory. This might be hard to pull off, but it’s a great way to spot a liar. Let’s say someone says that they love roller coasters, but you have a sneaking suspicion that they are actually terrified of them,all you need to do is play devil’s advocate.

Talk about how scary you think roller coasters are and situations where you have been terrified; they will probably agree with you on some level. Now all you need to do is compare that statement with what they initially said about loving roller coasters. Which statement seems more genuine? The answer should be pretty obvious. This is a technique that has been backed up by quite a few studies. Tell about your stories when you caught a liar.

Stuttering or correcting themselves

They’re doing is really changing their story to make it seem more real. If that person’s story has very few details to it, and they keep repeating the same facts. That sounds like they trying to convince themselves it’s a good chance they’re lying again and again. It’s kind of like you’re skirting the actual question of what has really happened. Real stories have details. They have nuances. They have subtle things about them is a great way to figure this one out.That’s another indicator of possible falsehood if they change their subjects off and trying to be the conversation away. Or they deflect questions or they don’t directly answer the questions.

if they get very defensive with their questions and asking questions like, you don’t trust me? Then they are trying to play with your sympathy. And probably they are lying.

When a person touches his nose, he is supposedly lying. This is another indicator that is used mostly, and i think that it is still valid. A lot of people can keep your hand away from there, knows you won’t see them pull their hand, other pocket, go straight to their nose. But if they’re relaxed and talking to you and they reach up to test their knows, it’s a good possibility they’re not on the level.If the person talking to moves from side to side a bit too much, which seems to be kind of distracting your attention from the subject at hand, that’s another good indicator.

If he or she covers their mouth or some other part of the face is a really strange psychological principle here. But we strive to do is we are attempting to conceal psychologically in the person; therefore, they try and hide. But covering up a part of the face, covering the mouth, or just placing their hands before the face or obstructing their face is a fantastic indicator.

The baseline is just simply how the person normally reacts when they are in just a normal conversation. You have to make a baseline for when they get excited first, and you have to observe the person. Their physical reaction just a normal conversation. Look at their face, look at their head the way it moves, and looks at overall their body moments when they usually talk.But here is a number of the physical indicators. Their eyes constantly read a person’s eyes fidgeting. Or when they are looking around and can’t keep eye contact with you or when this guy keeps looking down, looking away from you or not into your eyes, you likely got him nailed.

Before getting into the actual body language, remember, if you trust your instincts that will likely serve you most of this time, then you’re able to discover a lie or a partial reality. There’s a lot of subtle clues that are given off by somebody that tells you that they’re lying. If you feel like they’re lying then go with your instinct.

Tell about your stories when you caught a liar. What were some of the signs that made it obvious? We hope this helps you in getting the truth out of people in the future. What did you think of this post? Does it help you spot a liar? Comment below and tell us which of these tactics you use to catch a liar in the act.

PrevPrevious POSTControl Our Unpopular Opinions
Next POSTAchievement Motivation in Human BehaviorNext
RECENT POSTS
85+ Best Flirty Knock Knock Jokes to Make Her Laugh
100+ Best Questions to Ask Your Friends About Yourself
100+Heart Touching Emotional Brother and Sister Quotes and Messages
100+ Controversial Relationship Questions to Ask Your Partner and Spouse
FEATURED POSTS
Japanese Names That Mean Moon
Cute Spanish Nicknames for Girlfriend
What Does it Mean When a Girl Calls You Daddy?
What Is the Spiritual Meaning of a Bird Flying in Your House?