How to Deal with Jerks 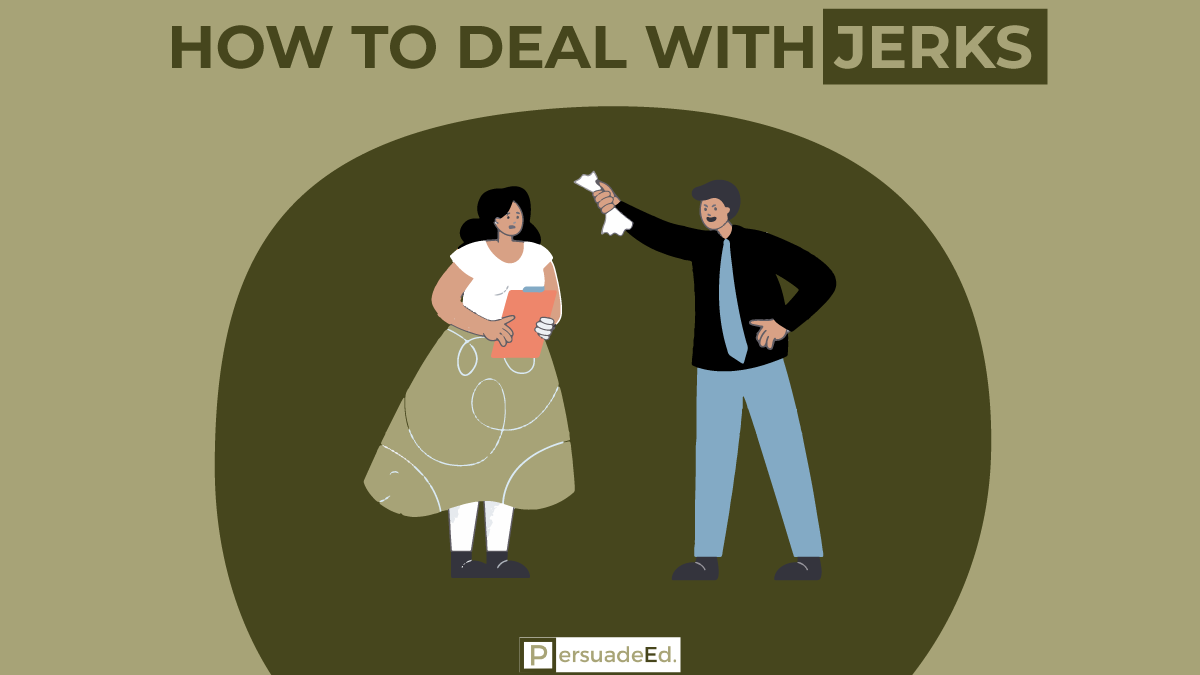 So when you’re dealing with jerks, what kind of skills do you need? Both of these mimic skills you need, and martial arts get another analogy to exchanging. Martial energy arts is an exchange of energy. And so his conversation that human interaction remembers that success in communication depends on an awful lot of finding that you’re common ground. If you can’t agree on where you’re going, then it will be challenging to convert somebody else’s energy in that direction.’

So the two skills that you need most probably are report building and redirection.

Report building may not seems like something you would use from martial arts. But indicating is that mirroring or an attempt to reduce the differences between you and another person to get someplace on common ground. This usually means just being able to meet a certain intersection point.

Redirection is the second important skill that is where you take the energy and control the path. It, it’s up to you what you need, and now you prevent it, towards a common goal.

Disagreement Or Mismatch In Our Communication Style

What we’re talking about now is a situation, where are common vision has either become obscured because of some sort of conflict or disagreement or mismatch in our communication styles, recognize this right away. Nobody cooperates with a person who seems to be working against them or seems to be their enemy.

In Human Relations, we really don’t have natural ground. Most people want to know one thing and one thing only. Are you with me, or are you against me? So it’s usually very polarized, hot or cold, yes or no. And that is something you have in common with everybody by nature. Everybody feels the same way, so if you’re working towards the same goal of getting them to understand that you are actually with them, you’re going to succeed.

Before getting to the end of redirection or redirecting, The next significant point is that you have to get to the point where you brought the person to common ground. You’ve got to achieve that report, or they’re not going to go with you. They’re still going to perceive you as being against them. The skill is often called blending. By the way, you’re just reducing the differences between you and them, making them believe that you are with them. Once you get to that point, then you can start to steer to the solution.

One of the first things that you can do is to use mirroring. It will help you out, not like a mimicking sort of way, but in a very report building kind of way. Do you want to blend yourself vocally with your volume and your speed? If you’re going to talk at the same volume with them, except for yelling, you have to lower your book, making them feel the contrast. The speed of talking is essential because they have to feel as if you’re like them. To do that, you should match their pace. Don’t talk significantly faster or slower compared to them. Otherwise, you are going to realize that you’re still different from them. The body language, however, should be pretty much arranged. Try to match their expressions; try to match their physical stature, their posture, and gesture.

The first essential step in the verbal portion is making sure that they understand that you’ve heard them. They want to be understood. Stephen Cov, he says, first seeks to understand, then seeks to be understood. When two people are trying to do this simultaneously, they’re both trying to be understood, and nobody’s willing to listen to the other. So their argument and arguments are going to happen or somebody’s going to leave.

So what that requires of you is one thing essential upfront, patience—the willingness to put aside your own needs and to hear what they have to say first. You’ve got to take that particular shot on the chin if you are the first. That’s your sacrifice to get into the common goal of doing this workout. We’re going to understand what they say based on two different levels.

The emotional feeling is when someone feels that you are aware of what they’re feeling and sharing the same emotions. There’s some empathy going on by intellectually; the person consciously believes that you are hearing what they’re saying. And when people become difficult With you, they eventually become jerks. Because they think that they have positive intentions. They don’t believe that they’re doing anything wrong. They believe that they’re positive. The first thing they need to do is to make them feel like you’re hearing them.

Those behaviors that make you look different than the other person

So the first thing to do if you start getting into a contentious discussion with anybody is making sure you reduce all those behaviors that make you look different than the other person. And just not all you have to do is nod your head and make the sounds of agreement. You don’t have to agree. You have to look like you’re at least listening. And occasionally, which you need to do is backtrack. Which is to be able to repeat back exactly what they said, in some way that they can understand that You have heard them. This is a very effective strategy. The better you can do this, the quicker a person will know that you are trying to get to common ground. What you want uses, use their specific words. Use the words that they said to repeat and affirm that you heard them and have used anything slightly different.

If you want to reduce the possibility of misunderstanding. The next step is clarifying. Clarifying is listening to what they say. You repeat it back a little bit when they start to come back down to Earth a little. You then become genuinely authentically curious about them and ask some questions. These questions are open-ended, not like yes or no questions. You want to ask me who, what, where, when, why, and how. Try and get specifics from them. The more you get that info, the more they’re going to feel satisfied that you have managed actually to hear them adequately.

There are also some more benefits for clarification, and that is, you’re going to get some high-quality information other than what they’re normally giving up to you. You can also demonstrate your caring about what they are saying because you’re actually using mental effort to interpret and think. Additionally, asking questions of them can slow down something long enough to determine where you are going is your time to believe. Additionally, it gives another person time to cool off. So remember, when they’re talking, your goal should be to listen and hear them. Because of the information you collect, you’re going to miss it if you’re not listening. But the data is you’re going to collect will help you make a very accurate assessment of them and achieve your goal of getting to a solution.

In a social situation, if there is a perception of the need to get along with you as a top priority. In other words, that person’s focus is for peace and for everybody to get along and have a good time, then in your interactions,you need to show them that you care about them. And you have to show it with some friendly small talk, be very considerate of the way you communicate with them. And then you’re going to increase their cooperation, they’re going to decrease the possibility of misunderstanding. If you’re with somebody who wants to get appreciation, they are very internally focused, very self-focused, or at their top priority. Then, when you recognize them or give them accolades or enthusiastic recognition, you’re going to increase their cooperation again and decrease the chances of misunderstanding.

if you’re dealing with a jerk, you’ve got to do one thing very, very effectively. You’ve got to make sure you tell them what is your positive intent. Positive intent is nothing more than the purpose you have, presumably, a worthy goal you’re trying to serve by your particular communication or behavior. The thing you’re trying to achieve. And that’s the other thing the other person is trying to achieve too. Nobody ever thinks they’re trying to do something wrong or do it badly or make it bad. So making sure that you identify what it is, you want to accomplish. then, let them understand that you’re not working across purposes. And the quicker you can make that obvious and apparent, the better you’ll be. And this is a great one that I’ve used all the time. When I deal with jerks. If you can bring out in the open what their particular positive intent is as well, because they do have one, even people arguing with you.

Make sure you’re telling the truth

Another important part about interacting with people, especially in contentious and difficult situations or dealing with jerks, is to make sure you’re telling the truth as best as you can. If you lie or conceal, it’s going to make it more difficult to get to the resolution you want. Be very sincere. Be very truthful to what you believe in, and you’ll always be able to back it up. Even if it requires eventually leading the conversation because you can’t accomplish what you hope too. You’ll still be on your own path, and your own honor will still be intact.

Make sure you stay flexible

Lastly, make sure you stay flexible. Your conversations are going to affect another person. That’s the unfortunate thing. Even though they’re just words people do react, the terms. They’ll become defensive. They might become withdrawn. They might become more aggressive. Your best part is always to be flexible and use your strategies as much as possible.

PrevPrevious POSTCommunication Style
Next POSTCrucial Conversation BookNext
RECENT POSTS
85+ Best Flirty Knock Knock Jokes to Make Her Laugh
100+ Best Questions to Ask Your Friends About Yourself
100+Heart Touching Emotional Brother and Sister Quotes and Messages
100+ Controversial Relationship Questions to Ask Your Partner and Spouse
FEATURED POSTS
Japanese Names That Mean Moon
Cute Spanish Nicknames for Girlfriend
What Does it Mean When a Girl Calls You Daddy?
What Is the Spiritual Meaning of a Bird Flying in Your House?