How to Handle Conflict of Interest 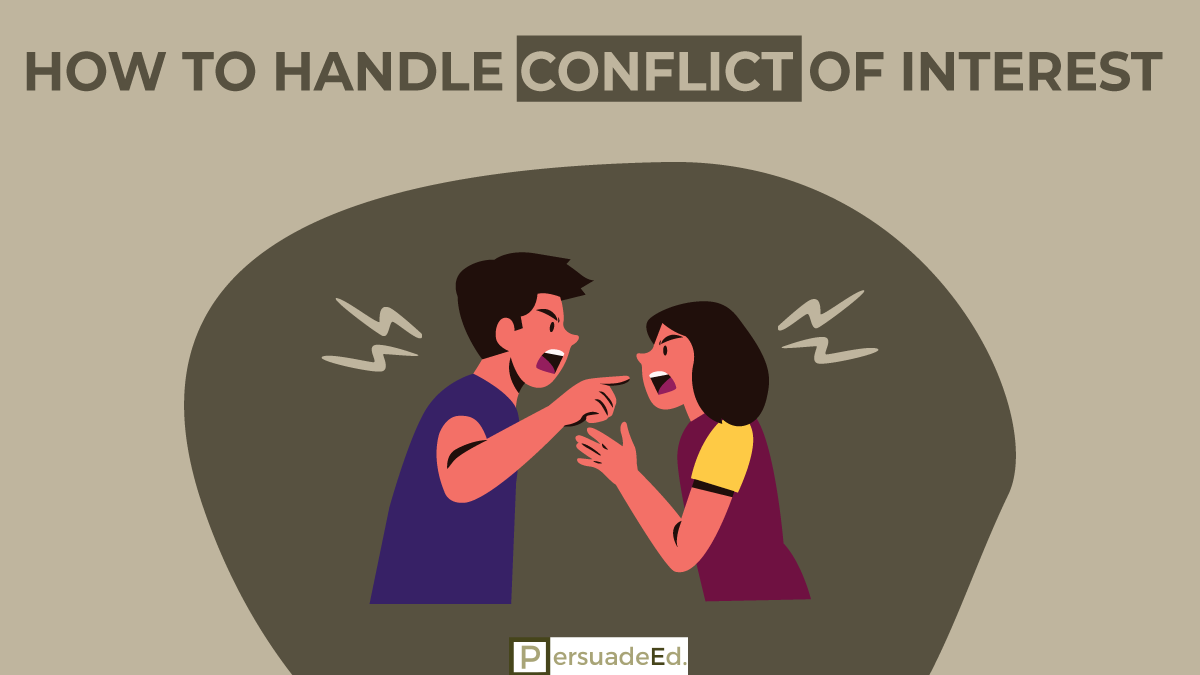 What is a conflict of interest?

Firstly let us discuss the term conflict of interest; here, the terminology itself states, it is the conflict between different interests, whether they are personal interest (interpersonal/intrapersonal) or public interest.
Conflict of interest of the holder of any public office involves the conflict between the public duty and private interests, whereby a public authority has a private interest that could improperly influence the public interest, activities, and decisions.

Conflicts of interest contribute to the abuse of public office for private/personal advantage.

How to Handle Conflict of Interest

Now we’re going to discuss how to handle separate situations, first is running into the conversation, and the second is where you might run into potential conflict. Avoiding the conflict will create more problems either in your life or someone else.

In the first type of situation, the kind of mode of thinking in which we are trying to control someone being in a calm state, and it results in an aggressive attack. And when you’re under attack like this, you’ve been targeted as the part of the problem. Aggressive behavior like this is either meant to push you back on to what they feel is the right course of action or eliminate you as an obstacle.

The first thing to do is watch out for your emotions because they’re going to be your most significant point of vulnerability. There are three different types of responses to this particular kind of attack, they are natural, and they don’t serve you.

The first is in a burst of anger in which you are going to be tempted to come right back at him with the same kind of attack, and what i suggest is never to do this.

The second response you might attempt to defend, justify, or explain your position. Remember, they don’t want to hear it. This will probably raise the emotional states for the other person.

The third and most important is to shut down and have no response, hoping to avoid battle; you’re going to listen to your fear and withdraw. This tells the person attacking this justified, and they can now roll forward right over you.

So the first step is to hold your ground and don’t run away. Don’t put in for a further attack, and make sure you retain your ground. Keeping yourself on the same topic demonstrates your true self for the service.

Step two is to interrupt the attack that they’re throwing at you. The best way to do this is just to repeat their name over and over until they start listening to you. You’ve got a broken pattern. Aggressive people who attack like assertive people who stand up for themselves and show them that they are not going to run over for as long as your assertiveness doesn’t look like an attack. Now you have to break their cycle and their pattern.

The third step is to backtrack and repeat what their main point is that you showed there’s understanding. Repeating them means you are assuring them the correct gateway for the actual welfare
.
STEP-4 Go for the solution

The fourth step is to go for the solution right away and blow it away. The person’s objective is to get focused on results and getting it done. You’ve got to get there fast.
Just start by saying something like, You know, the way I see it, we should do this.

STEP-5 Beautiful Wind-up to the matter

Then the last step is to close up the whole thing nicely by maintaining peace without embarrassing or re-attacking the attacker. Don’t shut them out. Don’t try and make yourself look like the dominant one. Just close it out with a respectable assumed conclusion.

This is where somebody who should be on your side as a desire to be appreciated, wants attention, and does it by cutting you down. There’s a lot of motivation for this kind of behavior. Some people throw out the friendly fire when they’re just angry about the way things are turning out, and maybe they’re carrying a little bit of a grudge against the person who they think interfere with what they were doing.

Some people do it just as a way of undermining somebody who might get in the way of what they want to do. And then again, some people just put the friendly fire out there to get some attention from the people that they want to recognize them.

Recognize this is likely to happen in social situations and is very aggressive behavior. But it has a people focus. This type of person is expected to throw out some rude comments, but make sarcastic comments, biting tones of voice, maybe a roll of the eyes. This is what you classically think of his passive-aggressive social behavior. They won’t tell you what’s going on, but they’ll make you feel like a dirtbag for it.
A couple of things to remember is, don’t react to their friendly fire. You’re going be setting yourself up. You’ll end up looking like the emotional person instead. Remember this that above all, if this person can’t get you to react to them, what they’re doing will lose its behavioral impact. And this is the best attitude to take to handle them is to use a muse curiosity.

You see their behavior for what it is, and it’s kind of funny, kind, like a little kid, and you’re going to play around with it like a bit of toy. Don’t take it personally because they don’t really necessarily know enough or even mean for it to be personal. They’re just trying to get attention. Remember when you got caught up in these things as a kid? It spiraled out of control, and you look like the bad guy. So let it go.

So your first step is to stop, recognize what they’re doing. Don’t let it get personal. And I always just silently look at them with a little smile on my face and the nod saying Nice try. Sometimes you can even say it verbally. If it becomes evident to everybody else that they’re trying to do this, do it with an amiable smile.

Always be respectful and then present your opinion, your viewpoint, your fax indirectly. Don’t go directly against what they said. Don’t say Oh, no, I think you’re wrong on this, or I disagree entirely. What you are trying is just asking for a problem that will be resulting in more conflict. You have to soften the words like, you know, maybe this is a possibility or hold on with me a moment. Let me see if this makes sense or something like I’m just wondering.

You know the things you think about they sound hypothetical rather than determined and challenging, and that will help you more than anything else. Something else you could use is being very subtle in these kinds of conflict situations, for an instance, you can use pronouns like we or us rather than singular pronouns like I or me or you.

PrevPrevious POSTWorkplace Communication
Next POSTPassive Aggressive BehaviorNext
RECENT POSTS
85+ Best Flirty Knock Knock Jokes to Make Her Laugh
100+ Best Questions to Ask Your Friends About Yourself
100+Heart Touching Emotional Brother and Sister Quotes and Messages
100+ Controversial Relationship Questions to Ask Your Partner and Spouse
FEATURED POSTS
Japanese Names That Mean Moon
Cute Spanish Nicknames for Girlfriend
What Does it Mean When a Girl Calls You Daddy?
What Is the Spiritual Meaning of a Bird Flying in Your House?