How to Make Someone Comfortable 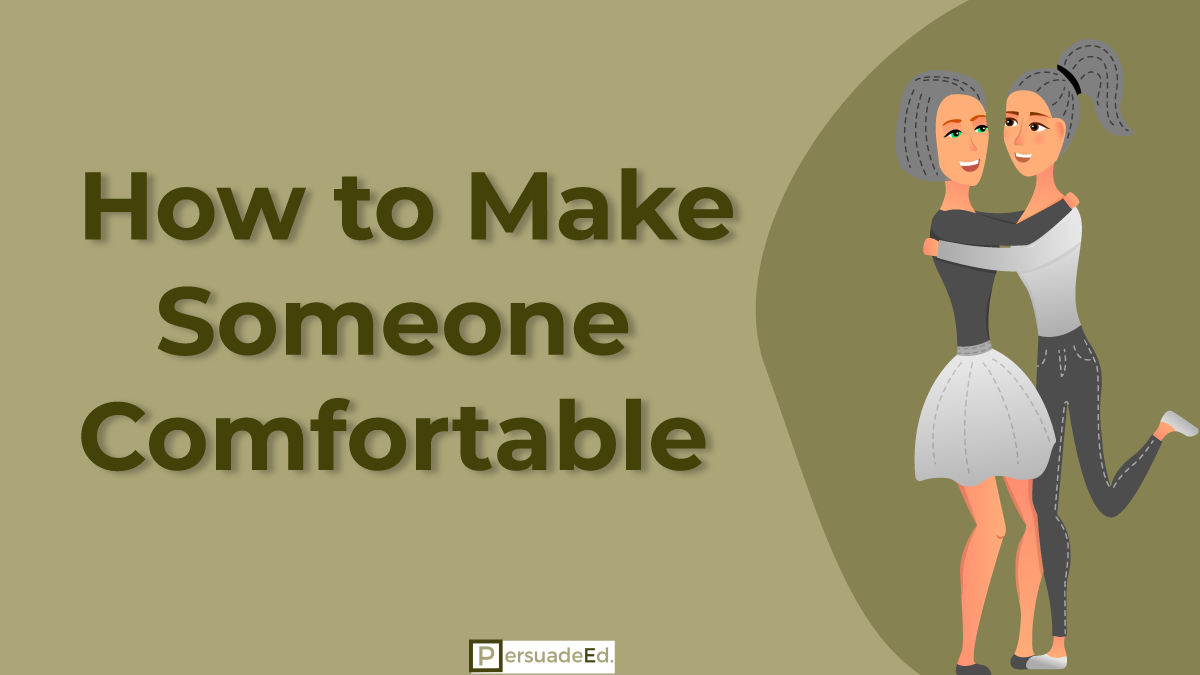 Making someone feel comfortable during conversation is very important because you want to get honest opinions and real progress when working on issues. Unless you can get to safety with another person, you can’t get that. So here in this section, we discuss some essential tricks that will help you query “How to Make Someone Comfortable” while conversing with them.

Pull yourself back anytime during the conversation.

Before entering any communication, make sure that you can pull yourself back and view the content of the conversation anytime during the conversation. Please don’t get yourself to indulge in what somebody’s saying, their choice of words, their emphasis, anything, because, in reality, the meaning is somewhere hidden underneath. And the emotional attack a person makes on you is because they don’t feel safe using regular dialogue with the ongoing conversation with you. So they resort to a defensive posture.

What you want from this conversation

So now the thing they are going to clear is whether you’re both working towards a common purpose. Shared purpose is essential because it tells that you’re both working towards the same goal. If you’re on their path, the other person will work with you, and if they feel that you’re not on that path, they will work against you. And now, if you’re in a debate or if you’re in a heated argument or if there are other forced opinions in the conversation. That’s when you know that the common purpose is totally different, and now, the person is trying to win over you.

You definitely make sure that we should feel connected. Sometimes when you’re in a conversation, you might feel there isn’t a common ground anywhere, there isn’t something that you are trying to get to and very often at that point, what I find is very successful for me and for many other people in that type of situation is to just invent some kind of common ground for us.

To get to the best way for doing this with someone is merely saying, Hey, you know what? We’re both right, or hey, you know what? You brought up some good points. I think we could both figure out after talking for a while that we’re talking about the same thing, or I’m on your side. And eventually, people don’t want to keep that type of conversation going in which they may be misinterpreted. You’ll find common ground again, and you’ll get on with the conversation.

Genuine care about the other party

You should have a natural concern about the interest of the other party and not just your own. If you can work with that in mind, they’ll believe you. If you don’t, you’re going to find that the other person will resist you and you won’t get what you want. So be very clear to make a positive stance that you wanted to work for you and the other person as well.

Also, make sure the other person feels that there’s going to be universal respect. The connection is the opposite. It gives everybody a feeling of safety because if you take that away, then that’s the only thing that other people can think about is that there’s no respect for them. It’s no longer about your original goals now. It’s now about defending their dignity, and you won’t win there. So you cannot afford to let a conversation slip on its own where the other person will feel disrespected.

Be the first to apologize for your fallacy.

Look, if you’ve done something wrong, be the first one to admit it and get past it quickly. Sometimes you can even apologize when it wasn’t your fault. Just make it clear that you’re respecting other’s emotional needs and that you’re willing to work forward to a solution.
Another very effective technique after you’ve apologized, and this could be used in any conversation with guys. You can apologize very firmly and with a lot of power. You can also apologize for smaller things that’ll make the other person at least feel like they were heard.

Now we are talking about emotions. You make yourself feel bad. You and only you are the owner and initiator of your emotional states. You create your feelings, and then once you created those emotions, you’ve given yourself only one of two options. You have to choose either act on those emotions or be acted on by them. And that means that when it comes to powerful feelings, you’re either going to take control of them and leverage them and put them to your purpose. Or you’re going to be the victim, and your conversations are going to be challenging every single time for you. If you try and choose not to act on your emotions, they will take control of you.

Giving meaning to a crucial conversation

When you’re in a crucial conversation, misunderstandings will happen. If you didn’t do anything wrong and it would convert the conversation to apologize, or if you think it would be, you don’t have to. What you can do is step back for a second and say Whoa, whoa, whoa, Hang on. What I meant to say was or what I meant to do was. What you do is you step back and make sure they’re clear about the understanding of what you intended to do so they know that you weren’t trying to threaten them. You weren’t trying to push them or manipulate them.

You can use this in conversation very quickly because it’s not apologizing. It is what gives the whole discussion some context and even some proportion about what’s being said. They may over-interpret what you say and vice versa. So by staying clear on your meaning and what you plan to do, you don’t make another person feel like you’re attacking or trying to disrespect them or drive them down in social value.

And what you do is do the two-step method.

Step-1 You tell them what you didn’t mean to do, which is what they probably thought you were doing. For example, – ” I didn’t mean to make you think I was neglecting you by not calling you.”

Step-2 Then the second step is telling you that you do want them to believe what I wanted to do for you was due to Whatever valid reason you have.

PrevPrevious POSTWhat is Communication
Next POSTCommunication for couplesNext
RECENT POSTS
85+ Best Flirty Knock Knock Jokes to Make Her Laugh
100+ Best Questions to Ask Your Friends About Yourself
100+Heart Touching Emotional Brother and Sister Quotes and Messages
100+ Controversial Relationship Questions to Ask Your Partner and Spouse
FEATURED POSTS
Japanese Names That Mean Moon
Cute Spanish Nicknames for Girlfriend
What Does it Mean When a Girl Calls You Daddy?
What Is the Spiritual Meaning of a Bird Flying in Your House?