Most Spoken Language in The World 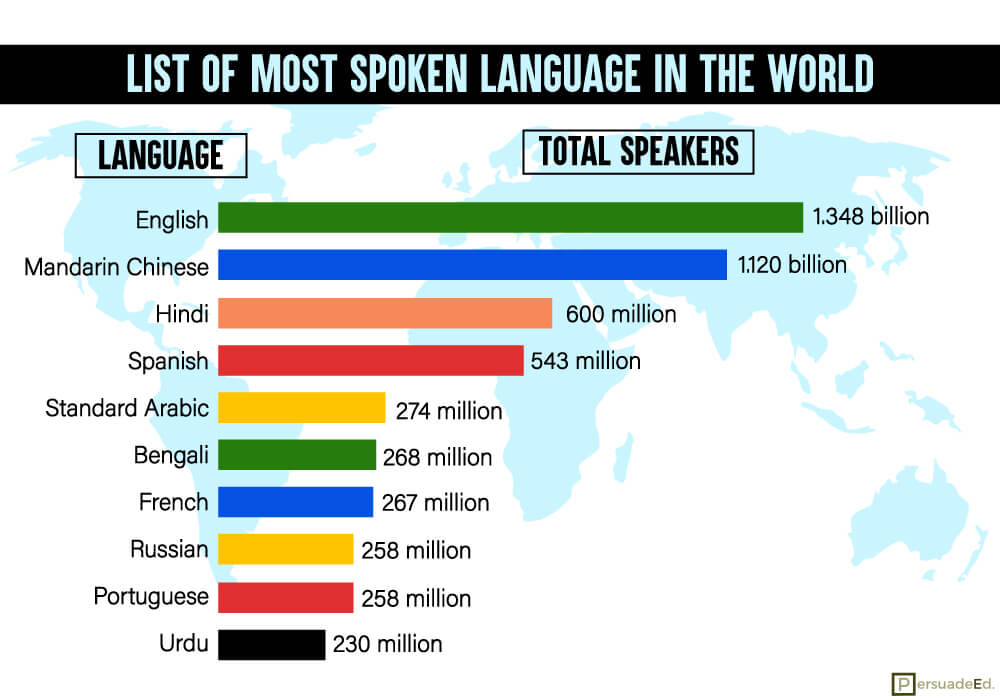 Native or Non-native speakers- Points that make some difference

Sometimes the true meaning of native speakers of a language is the question. A child who has learned a language from their parents and just after hearing them. So many of the non-native speakers try to conflict this with different reasons, like both husband and wife are professors for university. If they had a baby and learned English from birth, why don’t someone consider them native English speakers? The reason behind this could be the 2nd language would have a great impact on him. His second language is his first language. You can’t develop a fake accent in your child from birth. This is why native speaking is important and different in every region of the world.

Also, read this article-: When Do You Ask Someone to Be Your Valentine

1: English: The Language of Sky

According to Ethnologue, English is the most spoken language globally, with 1.348 billion total speakers. It is also the official language of the sky. So if you were traveling in a plane, the pilot must have English as his first language or second language. The interesting fact about the English language is that it just has 369.9 million native speakers. Among which we found three major categories of native speakers. From USA, UK, and Australia. The difference between all these languages is accent change. This is also because all three countries have the same branch of language, i.e., Germanic languages. Germanic languages were the branch of origin for German, Dutch, and English.

You may not know what phonetic languages are. But let us give you a glimpse of that first and tell you why Hindi is popular among phonetic languages. The pronunciation of Hindi is simple and the same as you write Hindi. Hindi has 600 million total speakers. Out of which 342.2 million are native Hindi speakers.

According to the Statista website, standard Arabic is the fourth most-used language online. You might be thinking then what three are on top of the list. The list is the same except for Hindi. Standard Arabic has 350 million total speakers. Arabic has different tongues: Egyptian, Maghrebi, Gulf, Levantine, Mesopotamian, Sudanese, Yemeni, etc. This might be controversial for many non-native speakers to list such a language with that much variation. Maybe this is why Wikipedia still doesn’t know how many of them are native speakers of Standard Arabic.

Bengali or Bangala has 268 million total speakers. Bengali is the state language of Bangladesh. And this is the second language from India, which is on the list of most spoken languages in the world. The constitution of India recognizes Bengali speaking. This comes under Indo-Aryan languages. All the Indo-Aryan languages have been developed from Sanskrit. And it is said that this has been in existence after 3000 years of breaking off from Sanskrit. A fun fact about Bengali is that it doesn’t specify any gender and discrimination.

French is the seventh most spoken language in the world, with 267 million total speakers. The native speakers of French are less than half of the total speakers, to be exact 79.6 million. French is in the 6 official languages of the USA. Just as English this also comes from the Indo-European family. This has been mostly spoken among France, Congo (DRC), Canada, Cameroon, Belgium, Ivory Coast, Madagascar, Haiti.

8: Russian: The language of war and piece

With 258 million total speakers, Russian is the eighth most spoken language in the world. You must be known to Russian mafia movies. Countries like Russia, Belarus, Kyrgyzstan, Kazakhstan, etc. These countries are those Russian is the official language. Since it could be the official language of war and peace, we have a very small population who speak Russian in the USA. You might have seen a person with a full arm tattoo. This could be the person who knows Russian fluently around you.

9: Portuguese: Only 5% of Portugal knows this language

10: Urdu: Grandchild of Arabic and Persian

With the 230 million speakers of Urdu, it is the 10th most spoken language in the world. There is a mixed dialect of the language. With the beauty and grace in Urdu, it seems to be the most sophisticated language in the world. The reading and writing of Urdu are quite different from other languages. Unlike other languages, Urdu is written from right to left. You could try searching a page in Urdu on google. You would see a mirror image like search results.

This was the end of the most spoken language in the world. Some of you might be thinking that you know a language that is not on the list. To see the reason, you first need to know that how many languages are there. There are more than 6500 languages in the world. These are those which are known around the world. We can’t even count the name of all the languages. It could take much time for you all.

PrevPrevious POSTWhen Do You Ask Someone to Be Your Valentine?
Next POST16 Fun Games to Play with Your BoyfriendNext
RECENT POSTS
85+ Best Flirty Knock Knock Jokes to Make Her Laugh
100+ Best Questions to Ask Your Friends About Yourself
100+Heart Touching Emotional Brother and Sister Quotes and Messages
100+ Controversial Relationship Questions to Ask Your Partner and Spouse
FEATURED POSTS
Japanese Names That Mean Moon
Cute Spanish Nicknames for Girlfriend
What Does it Mean When a Girl Calls You Daddy?
What Is the Spiritual Meaning of a Bird Flying in Your House?