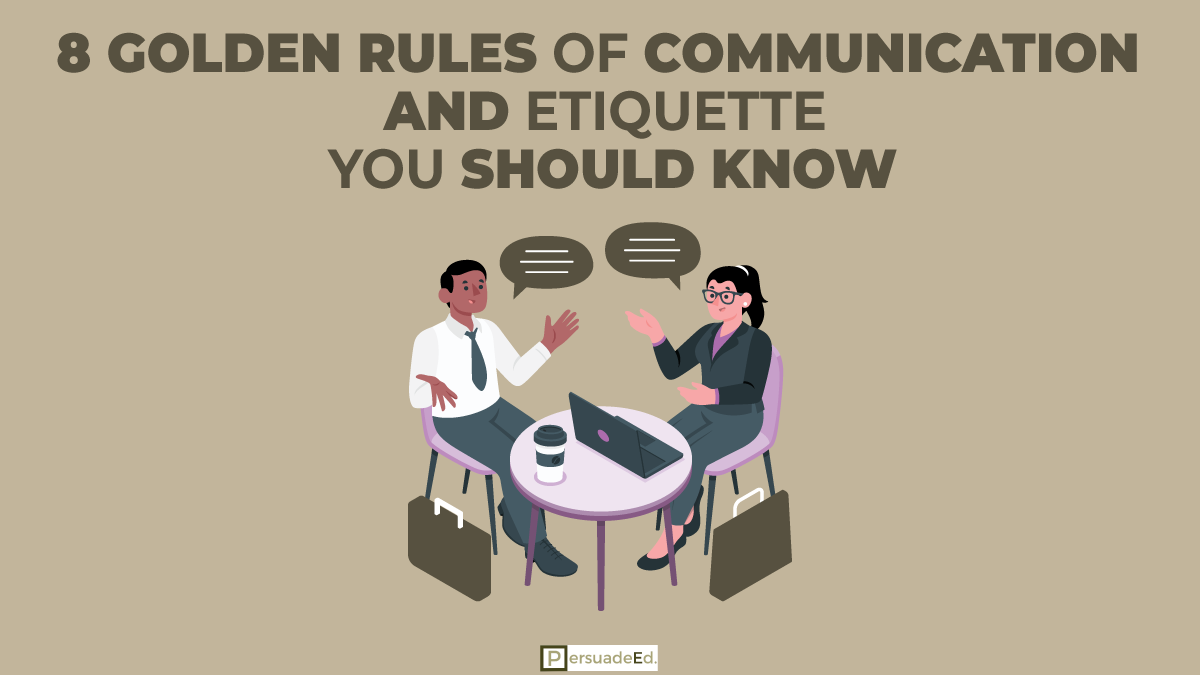 Let me brief you with the rules of communication before you start reading this long post:-

You can also see The rules of Communication

Now let’s discuss all these rules in a wordy manner.

8 Golden Rules of Communication and Etiquette

From the eight golden rules of communication, the first rule is Listen Attentively. Listening is 50% of every conversation. First, you listen, and then you reply to the discussion. The best or most skilled conversationalists are better listeners than talkers. Showing present-minded, showing attentiveness, and showing awareness is the essential stages of attentive listening.

This rule is the most important for good communication and good conversational skills. If you listen attentively, you can reply to the questions more effectively. And more effective your answer is, the more are the chances that you are winning that conversation. Consider yourself in some position you are talking to someone. Suddenly, you ask a question, and the person cannot even recall the question. Would you feel any good in that situation because everyone talks about getting their voices heard? So, this is going to be the case for other people if you don’t listen attentively. Make sure while having any conversation next time you remember this first golden rule of communication. This is also an etiquette which is required for good communication.

You can also read about workplace communication

The number two golden rule for effective communication is Do Not Interrupt. Do not ever interrupt anyone while someone is talking or having any critical discussion with you. Whoever you are talking to, never likes to have their train of thinking interrupted. Here are some things that interruption show, if not straightforward but can have impacts for late. First of all Interruption shows that you don’t care about what other person is saying, Secondly it shows that you can’t let them at least express what they have to say on the topic, Thirdly it shows that you are impatient. You only care about blowing your thinking before you forget that thing and last but not the least it is a general disregard of common courtesy when it comes to talking.

No matter how painfully, slow or frustrating the conversation, your priority must be to let them speak. Listen to a person and get their thoughts out as it can be when somebody doesn’t know how to express themselves.

Nowadays, everyone is impatient, no one wants to listen to jargon of other people, but if you become a person who can listen attentively and listen by not interrupting, you have a lead over all the people with whom your partner had the conversation. So, basically, your impression will be good on that person because you will be the one who will listen to them effectively and without interrupting.

Do not interrupt doesn’t necessarily mean that you need to keep yourself quiet or dumb to the situation. Still, it means that you are responsive to the case and listening very effectively, and if the other person has completed the conversation, now it’s your turn to express yourself.

This third golden rule of communication is to avoid criticism. Criticism itself is a negative word. This takes you from positivity to negativity. Just avoid criticism of any kind in any kind of conversation. Even when it’s a corrective discussion, just avoid the criticism. You can have other methods to explain your beliefs, but your priority must be to avoid the criticism. In other words, if you are talking to somebody to get them to change the way they are doing something because they are not doing it quite right, this could be your coworker, could be subordinate, could be your girlfriend, whoever it is don’t criticize. Criticism puts a wrong impression on your behavior, if the criticism is harsh then it can lead to complete disconnection. So, always find another way to get your voice heard. Make sure the person doesn’t get offended by that.

The fourth golden rule of communication is to use praise. I always prefer credit over ridicule or sarcasm. Many people tend to fall into this mode of communication by being blunt, which is obnoxious. The basic theory behind this is to reinforce good behavior and ignore bad behaviour. Whatever gets attention gets repeated. Always praise the good things, the times that somebody does something that you want, as opposed to ridiculing them or using sarcastic comments to get them to change. You may say something like. Well, at least this time he called me first before you went out. Instead of you know, I wanted to recognize last week when you give me a call before you went out instead of just calling me from the bar. But that was cool of you. Thanks, The two will get vastly different results and it is a best rules of communication.

The fifth golden rule of communication is never to talk down. Never act superior to them. Talking condescendingly to a person sends out a terrible impression about you. They will sense it, no matter how nice they are, and they will resent you for it, and you’ll look like an arrogant idiot. It’s something connected to respect. Everyone had a feeling of respect in themselves, and when someone tries to manipulate that feeling, people get offended.

The sixth golden rule of communication is to drop the pretense. Don’t try to fake anything. Be honest, don’t try to be somebody you’re not. It shows a feeling like you are somebody that can be understood and very down to earth. Don’t use a clever phrase to cover something. Tell everyone what you think. You will be respected 10 times more by just dropping the pretense or being real to everyone to whosoever you talk and it is very important rule in the rules of communication.

The seventh golden rule of communication is to avoid gossip and rumors. Even guys fall into this just as much as women. Whispers and rumors fly all the time, just like air surrounding you. These can harm your personality or these can be fun as well. These are some drama talks that we could get into. We all know what is going on all around but still pretend to listen. We really love to talk about who’s probably getting fired.

Who’s doing what at work, but ultimately when you slip into that mode of thinking, you are lowering yourself to the person’s level that you’re trying to avoid being the common man, all people, a great accomplishment and great conversation. Talk about ideas and possibilities more than they talk about people and drama.

If you find someone gossiping, then correct them and try to explain the situation in other words and ultimately move the conversation to positivity.

And last but not least, This is probably the most essential or platinum rules of communication.

The eighth golden rule of communication is treating everybody as if they’re essential. Treat them as if the most crucial person in the room like you couldn’t be with anybody more fascinating. This is the fastest way to make new friends. Think of the last time somebody expressed an unwavering interest in you.

They were asking you questions. They were genuinely interested in you. Or at least, so they seemed. And for that few minutes, you’re talking to them. You felt like you were the man. Now can you imagine passing that on to somebody else? Measured the magnetism and the social power you’ll have in that situation.

People will want to be around you. It’s not just about the excellent conversation. It’s about developing your social power, your social status, your social network.

PrevPrevious POSTHow to Talk to Anyone
Next POSTPositive TraitsNext
RECENT POSTS
85+ Best Flirty Knock Knock Jokes to Make Her Laugh
100+ Best Questions to Ask Your Friends About Yourself
100+Heart Touching Emotional Brother and Sister Quotes and Messages
100+ Controversial Relationship Questions to Ask Your Partner and Spouse
FEATURED POSTS
Japanese Names That Mean Moon
Cute Spanish Nicknames for Girlfriend
What Does it Mean When a Girl Calls You Daddy?
What Is the Spiritual Meaning of a Bird Flying in Your House?