Smart Words to Use in a Conversation 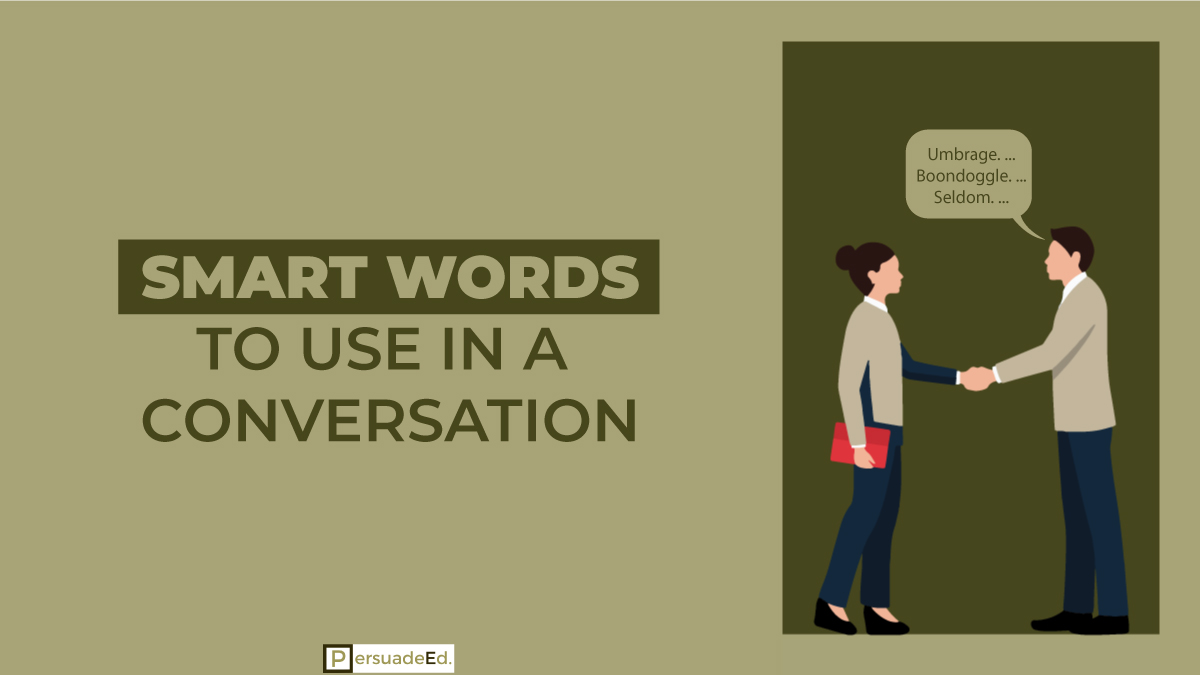 As English speakers, we all want to learn new words and make a good impression in a conversation. If we use some new or less known words, even if with a simple meaning, our print on another person increases, and it sounds smarter.

Also, we don’t want to sound like we don’t have appropriate or enough words to say in the conversation. So we should learn some smart words so that our English vocabulary increases and we can use them to make good impressions!

So, let’s know about some smart words to use in a conversation!’

Smart Words to use in a conversation!

Here is the list of smart words to use in a conversation with their meanings and examples:-

You use the word when you find someone is making a good point during an argument or when someone makes a clever point.

Person A- You said you would give me a ring!

Person B- Yes, I had already given you!

Person A – But it is an artificial ring, not a gold ring.

Person B- I said to gift you a ring but not mentioned what type of!

Read: how to be a good conversationalist

The word is used to describe anything that failed miserably or is totally flop or failure.

The last season of ‘Game of Thrones was a total fiasco!

Capricious is used to describe someone’s behavior or any situation that changes from time to time or suddenly.

Women’s behavior changes from cute to angry to sad, and they are so capricious.

Quick Link: she never texts me first but always replies

Quintessential word is used to show a fine example of something or someone.

The story of Elon Musk is quintessential for all people who want to succeed in life.

Cavalier can be used in place of carelessness or thoughtlessness.

Exams are approaching, and you are acting cavalierly.

Exchanging something for another thing.

Quid pro quo is a Latin word, which means, ‘this for that.’ So we can better use the word in place of the barter system.

I gave her my shoes as quid pro quo for his shirt.

Expert Tip: how to start a conversation with a random girl

Vitriol is a word used for sulphuric acid in an ancient language; it came into the English language from there. It is used when someone gives bitter feedback or very harsh Criticism either in writing, speaking.

The reactions to his speech were vitriol.

Vamoose word is derived from the Spanish word ‘Vamos,’ which means, ‘let’s go.’

Boondoggle is an actual word that describes an activity that is shown as very important, but in reality, it is just a waste of time.

Sycophant is the word you can use for the person who does a lot of buttering to someone and takes advantage of that buttering.

Mark is the biggest Sycophant in our office!

Check Also: how to keep a conversation going with your crush

The interviewer was not interested in taking the interview; he asked all perfunctory questions.

Please let us know what you think of our article in the comments!

Thank you for reading!

PrevPrevious POSTThe Best Argument Against Democracy
Next POSTHow to Answer How Are You Doing?Next
RECENT POSTS
85+ Best Flirty Knock Knock Jokes to Make Her Laugh
100+ Best Questions to Ask Your Friends About Yourself
100+Heart Touching Emotional Brother and Sister Quotes and Messages
100+ Controversial Relationship Questions to Ask Your Partner and Spouse
FEATURED POSTS
Japanese Names That Mean Moon
Cute Spanish Nicknames for Girlfriend
What Does it Mean When a Girl Calls You Daddy?
What Is the Spiritual Meaning of a Bird Flying in Your House?